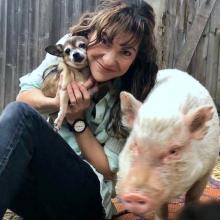 In both her clinical work and in her writing, Pia addresses topics ranging from the loss of a personal companion animal to the climate of animal welfare as it relates to social justice on a broader scale.
Her writing is included in the recently published, Pet Loss and Human Emotion. And her extensive involvement in the animal rescue effort following hurricane Katrina has been featured on such shows as Animal Planet’s Hurricane Heroes and 20/20 to name a few.

You may also recognize Pia as a frequent guest on The Martha Stewart Show, where she highlights the important role that animals play in our lives and how our societal treatment of animals conveys important messages to our youth. Pia is also a regular guest contributor to The Martha Stewart blog, "The Daily Wag."

Pia is the spokesperson for www.Adopt-A-Pet.com, North America’s largest non-profit pet adoption website. This site gives adoptable animals national exposure and a chance at being adopted into loving homes.

Dr. Salk hosts The Save-a-Pet show and is a contributing writer on the Adopt-a-Pet.com website. She covers such topics as why adopting not only saves lives, but makes for good parenting and promotes pro-social behavior in today’s youth.

Pia has developed programs that pair at-risk teens with animals who share similar histories of abuse and neglect. According to one of her Psychologist colleagues, “She may be little in stature, but she is big on personality. The kids and animals she works with love her ability to roll around and get dirty, both physically and emotionally. She has a knack for reading both animals and humans!”

Dr. Salk brings her own rescued animals into her clinical work. And she often credits the animals as being “the real therapists.”