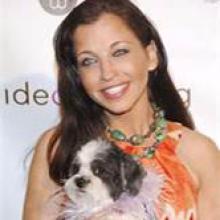 You might recognize her from her appearances on NBC’s Today Show, and as the face of the Chicken Soup for the Soul pet series, or by Animal Fair’s decade of promoting animal welfare, rescue and responsible breeding.

Wendy was inspired to found Animal Fair in 1999, after adopting her dogs Pasha and Lucky and learning over 12 million animals were being euthanized annually in shelters. She knew she could not just sit and roll over so she launched the premier lifestyle media company promoting animal welfare and rescue.

She promotes animal advocacy through various media outlets including: the Today Show, Good Morning America, FOX News, CNN, The View, E!, MTV, VH1, The New York Times, Vogue, People Magazine, The New Yorker, Oprah and many others. You can also catch Wendy on Bravo! TV’s Real Housewives of New York, and Mad Fashion, and on two of TLC’s Cake Boss episodes with the world’s most expensive cake and most expensive pet wedding in history!