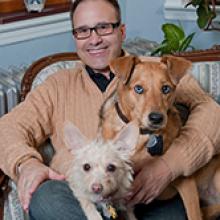 Steve Dale, certified animal behavior consultant (CABC), has reached more pet owners over the past few decades than any other pet journalist in America.

For 21 years, his twice weekly newspaper column was syndicated by the Chicago Tribune. Steve was a contributing editor for USA Weekend (2002 to 2014), and regular columnist at Cat Fancy magazine (2006 to 2014). He has written for a long list of magazines, from People to Dog World (where he was a columnist).

He’s currently a columnist and contributing editor for CATster, and authors a column called Steve Dale’s Vet World for Veterinary Practice News.  He also contributes blogs for various websites, including for Victoria Stilwell and the Pet Health Network.