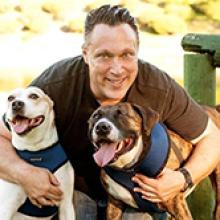 An Emmy nominated showman who specializes in unforgettable, innovative, 'appointment' television, Michael Levitt has emerged as one of the industry's most sought-after producers of event TV programming. His Hollywood-based production company, Michael Levitt Productions, has become a tried and true creative factory for prime-time hits of every kind.

Levitt's track record in creating annual franchises, memorable one-off live events, and successful reality series is a testament to his love of what he does, and his dedication in giving viewers the most magical pop culture moments on television while providing talent with the best possible showcase.

In 2014 Michael created and produced “The All-Star Dog Rescue Celebration” with actress Hilary Swank that aired on Fox on Thanksgiving Night.  It was the first ever primetime dog-a-thon designed to promote rescue and educate people on such topics as: How amazing it is to rescue a senior or special needs dog, the importance of spay & neuter, debunking the pit bull myth, and more.

In 2018, Levitt co-created and produced the "American Rescue Dog Show" for the Hallmark Channel. With a format similar to a fancy dog show that selects a winner based on their bloodlines and conformation, this special featured all rescue dogs competing in such personality driving categories as “Best in Couch Potato,” “Best in Wiggle Butt,” “Best in Underbite,” “Best in Kissing,” and more.  The overall winner was “Jackie” a senior dog that won the title of “Best in Rescue” and warmed the hearts of viewers all of the country showing them how special seniors truly are.

When he's not producing shows, Levitt works tirelessly with animal shelters, and non-profits to place rescue dogs in homes. His own beloved pit bull terriers, Trooper and Nelson, both rescued from dire situations are the mascots for Michael Levitt Productions, as well as dedicated and well-behaved viewers of his work.

Michael’s greatest joy is when he can combine his two worlds of producing and rescuing to make programming that celebrate rescue dogs and the joy they bring to our lives.